With the evolution of the cannabis testing industry, it becomes essential to use the microwave digestion method for analysis of heavy metals 1        Cannabis, the plant that slowly captures the world

Cannabis, one of the earliest cultivated plants, originates from central Asia or northern parts of south Asia, where the benefits of the plant were recognized early on. Being quite robust, the plant has since not only been used as medicine, but also for soil remediation, in food-, textile-, and many other industries. Starting in the 19th century the significance of cannabis as medication increased considerably having shown beneficial effects in the treatment of pain, mood disorders, and inflammatory diseases. However, when other medicinal products such as morphine or opium were found to be harmful for the human metabolism and thus considered poisonous, the use of cannabis was also declared illegal in 1925. In the last decades the prohibition of cannabis has been scrutinized and as of this writing cannabis is sanctioned for medical use in Germany, the Netherlands, the Czech Republic, the UK, Israel and in some US states. Uruguay, Canada and Georgia are the first countries to fully legalize the use of cannabis. Upon the legalization and increasing popularity of cannabis comes the need for quality control of the final products and monitoring potential toxic constituents such as heavy metals, making sample preparation an important key factor for ensuring accurate and reproducible results.

Since final products of cannabis are designed for human consumption, cannabis-based products such as oral medications, edibles, oils, tinctures and salves must therefore be tested for the presence of heavy metals to ensure consumer safety and product quality. Currently the biggest problem for the cannabis industry is the lack of uniform regulations and certified reference standards. There are no standard test methods for any cannabis matrix, nonetheless, some degree of laboratory analysis of finished products and quality and safety testing are enforced and regulated locally. While main active agents in cannabis, cannabinoids such as Tetrahydrocannabinol (THC), Cannabinol (CBN) or Tetrahydrocannabivarin (THCV), are normally identified and determined via extraction and subsequent analysis via HPLC or GCMS to determine the effectiveness and quality as a drug, the identification and quantitation of agrochemicals, moisture content, microorganisms or heavy metal analysis play a vital role as well. Certain heavy metals are toxicants that cause adverse effects on human health. Toxic heavy metals, such as arsenic, cadmium, lead, and mercury, which are called “the big four” are persistent once released into the environment and can accumulate in Cannabis plants. Cannabis is known for its high metal uptake from its surroundings, for example soil, water or fertilizers and pesticides or even environmental pollution.  Although heavy metals concentrations are generally very low they still be harmful to end consumers, even more so if their health is already compromised. As such, it’s important to measure the toxic elemental content of plants and plant materials, a concept that is standard procedure in pharmaceutical or food industries, where testing is required by regulatory bodies.

3        Ball Mills, the efficient tool for grinding and extraction

After sample collection the samples have to be prepared before digestion. Ball mills are the all-rounders among the mills used for grinding and homogenization of a broad range of sample materials. This is advantageous for users handling a broad range of samples, as it is often the case in cannabis testing laboratories. The grinding of solid samples is essential to ensure homogeneity and the needed fineness of the sample for further processing. For sensitive materials, volatile components or soft samples (f.i. plant material, edible cannabis products or candies, for the detection of pesticides) milling under special conditions might be necessary. In this case the jars can for example be frozen with liquid nitrogen before the milling process. 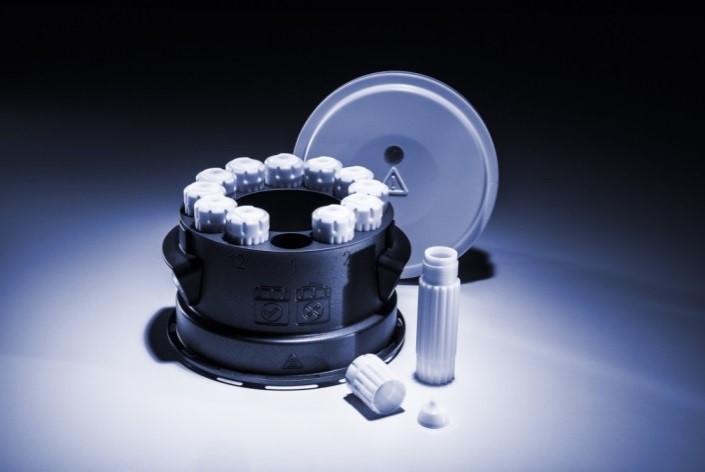 While the evolution of the cannabis testing industry continues, it was shown in the pharmaceutical, food and petroleum industry that microwave digestion is the tool of choice when complete dissolution for the testing of heavy metals is needed. For that reason perfectly grinded samples are afterwards digested with the help of microwaves.

By using microwave technology in closed vessels it is possible to heat up the sample solution extremely fast and perform digestions at high pressures and temperatures, even far above the boiling point of the used acids. The possibility to perform digestions at higher temperatures reduces the digestion time significantly and ensures complete digestion with minimized interferences during analysis. At the smallest footprint available different samples such as oils, flowers or edibles can be digested simultaneously with Multiwave GO. Thanks to HVT vessels with SMART VENT technology overpressure related to reaction gases is safely released and thus higher sample weights can be applied.

Ziryab Imad, is the Business Development Manager for Prime for Scientific and Technical Supplies and specializes in: density measurement, viscosity measurement, optical measurement techniques, sample preparation, and petroleum testing instruments. He is passionate about doing things in an unorthodox manner to achieve greatest success.